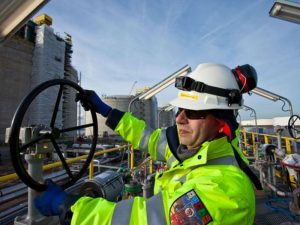 Gate terminal and its shareholders have decided to invest in an additional high-pressure compression facility to increase its flexibility services towards the customers by reducing the level of minimum send out of natural gas.

Branko Pokorny, managing director of Gate terminal: “LNG flows are increasingly depending on LNG and pipe line gas prices at various locations in the world. We offer our customers already quite some flexibility in the send out pattern of our terminal. The additional facility will further increase this flexibility by allowing our customers to reduce their minimum send out. This investment fits very well in our objective to build a flexible and high quality LNG import terminal.”

Gate terminal is fully on track to start operations in the 2nd half of 2011. The current capacity of 12 billion m3 natural gas is booked by Gate terminal’s four customers and permits have been granted for further expansion to 16 billion m3 throughput capacity.”

Profile Gate terminal B.V.
In 2005 N.V. Nederlandse Gasunie and Royal Vopak decided to jointly develop Gate terminal (“Gas Access To Europe”), the first independent LNG import terminal in the Netherlands. Imported LNG will be unloaded, stored and regasified at the terminal before distribution through the gas transmission network for the European markets. The terminal will have an initial annual throughput capacity of 12 billion cubic meters per year (bcma) and can be increased to 16 bcma in the future. Four European energy companies (DONG Energy from Denmark, EconGas and OMV from Austria, E.ON Ruhrgas from Germany and RWE Supply & Trading Switzerland) have signed long term throughput agreements with Gate terminal. As part of the agreement these customers (or their major shareholders) each hold a 5% equity stake in Gate terminal. The remaining 80% of shares are held by Gasunie and Vopak, thereby safeguarding the independence of the terminal.

Gasunie is a gas infrastructure and gas transmission company with a prominent position in Europe. The total length of its pipeline network in the Netherlands and Germany comes to more than 15,000 kilometres and, with an annual throughput of almost 125 billion m3, it ranks as one of the most extensive high pressure networks in Europe. Gasunie operates and develops the Dutch national gas transmission network and offers transmission services. Since 1 July 2008 Gasunie owns the network of the former gas transport division of BEB and EMFG in Germany, which is now functioning under the name Gasunie Deutschland. Gasunie considers the wishes of its customers, who want their gas to be transported at competitive tariffs, to be of prime importance. Gasunie also offers other services within the scope of gas infrastructure. Gasunie carries out all these activities in a safe, efficient, profitable and sustainable manner. In doing so it also serves the public interest.

Profile of Royal Vopak
Royal Vopak is the world’s largest independent tank storage service provider, specialized in the storage and handling of liquid chemicals, gasses and oil products. The company operates 80 terminals with a combined storage capacity of more than 28 million cubic meters in 31 countries. The terminals are strategically located for users along the major shipping routes. The majority of its customers are companies operating in the chemical and oil industries, for which Vopak stores a large variety of products destined for a wide range of industries.