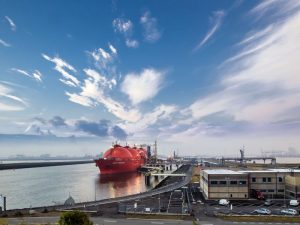 Last week it was announced that Gate terminal shows significant growth in terms of import and export of LNG. Compared with the same period in 2013, between January and September this year 64% more LNG was imported, to 650,000 tons. The import and export grew to 950,000 tons, an increase of 137%. Also the small scale market is developing: there are regular LNG deliveries to Scandinavian countries and there are already 100 trucks loaded with LNG for distribution throughout Europe.