Gate terminal (main shareholders Gasunie and Royal Vopak) today announces that it has signed a financing agreement with the European Investment Bank (EIB) and four other banks that already participate in the syndicate of ten international banks which currently provide long term financing to Gate terminal. This additional financing agreement supports the funding of the expansion of the Liquefied Natural Gas (LNG) break bulk infrastructure and services at the Gate terminal in the Port of Rotterdam. 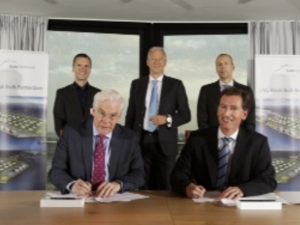 The investment in this break bulk infrastructure, first announced on 3 July 2014, is expected to boost the use of LNG as a cleaner alternative transportation fuel in the Netherlands and Northwest Europe. The new infrastructure will be located next to Gate terminal. Since 2011 the terminal enables overseas LNG import into Europe which enhances gas supply diversification and increases the security of supply.

The new financial agreement is an addition of Euro 76 mln to the existing long term debt financing program of Gate terminal of EUR 750 million, as originally established in 2008. Today the ceremonial signing of the financing agreement took place in Rotterdam in presence of Pim van Ballekom (EIB Vice President for the Netherlands), René Oudejans (Member of the Executive Board and CFO Gasunie), Jack de Kreij (Vice Chairman of the Executive Board and CFO Royal Vopak), Dick Meurs (Managing Director Gate terminal) and Paul Smits (CFO Port of Rotterdam).

The construction of the new break bulk infrastructure is scheduled to start later this year. Commissioning of the facility and commencement of the first services are scheduled for the first half year of 2016. Gate terminal will be expanded with an additional harbor basin, financed by the Port of Rotterdam, that enables LNG distribution for small scale use with a maximum capacity of 280 berthing slots per year. As the launching customer, Shell plays a key role in enabling the project.

In January 2014, Gate terminal has successfully launched a loading station for trucks and containers, with a total capacity of 5,000 trucks per year. The new break bulk facility will continue the further development of the terminal into a hub, from where LNG can be re-exported to other parts of Europe and around the world.

René Oudejans and Jack de Kreij jointly commented: “We are proud that the European Investment Bank and a strong international group of reputable banks expanded their long term financing to Gate terminal. With this funding we can, in a disciplined way, step by step further develop Gate terminal. This new break bulk infrastructure will facilitate the usage of LNG as a low emission fuel all over Europe.

” Pim van Ballekom said: “Gate terminal is essential for the security of energy supply in Europe. The expanded facility will not only benefit Rotterdam, but also enhance the supply capacity of an important alternative fuel for transportation and industry in Europe. The European Investment Bank is pleased to build on previous support for both Gate Terminal and Maasvlakte and is committed to working with other banks to address Europe’s energy needs.”

The expansion of the financing facility will have a maturity in line with the existing financing which expires at the end of 2029. The European Investment Bank will finance EUR 38 million and the syndicate of four banks a maximum of EUR 38 million supported by an additional guarantee facility. The project is key to facilitate LNG storage and to secure LNG supply in Northwest European ports, such as Gothenburg. The maritime connection between Rotterdam and these ports is regarded as a part of the EU ‘motorways of the sea’ concept and has therefore been selected for co-financing under the European Union’s TEN-T program.

In this publication lies with the author’s opinion . The European Union is not liable for any use that may be made use of the information and publication.