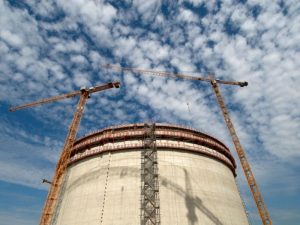 Construction process first Dutch LNG terminal on trac
With the positioning of the roof on the third and last tank, Gate terminal has reached the highest point in the construction process of its terminal. Seven powerful booster fans blew the whole 670 ton roof slowly upwards to a height of approximately 40 meters. The roof, about 15 meters high, consists of a steel skeleton joined together by kilometres of welding. When the roof is placed at the top of the tank, the tank will be sealed all round. Recently, the roofs of the other two tanks have been positioned successfully. Gate terminal, a joint venture of Gasunie and Vopak, is the first independent import terminal of liquefied natural gas in the Netherlands.

Gate terminal-director Branko Pokorny: “In the construction of LNG tanks, the roof is preassembled at the bottom of the tank. The technical teams of the building consortium, Techint (I), Sener (E), Entrepose (F) and Vinci (F), have secured the roof with the lift exactly and according to planning in its final position. The airlift was very well prepared and went smoothly and safely as planned. Achieving this milestone shows that Gate terminal is fully on track to start operations in the 2nd half of 2011. The current capacity of 12 billion m3 natural gas is almost fully booked by our four customers and the terminal can easily be expanded to 16 billion m3.”

In mid 2008 construction of the three tanks began in earnest. Each of them has a diameter of approximately 90 meters, which makes it almost as big as a football field. Each of the tanks can contain a maximum of 180.000 m3 net and can in total provide gas to almost seven million households in the Netherlands per annum.
—————————————————————————————————–
For more information, please contact:
Gate terminal B.V.
Peter C.M. Bassa
Manager Communications
T: + 31 180 64 68 80
M: + 31 6 22 40 73 82
E-mail : peter.bassa@gate.nl
Visit our website www.gateterminal.com for more information about Gate terminal. At our website you can download photographs of the construction process and there is a short film about the airlift available.

In 2005 N.V. Nederlandse Gasunie and Royal Vopak decided to jointly develop Gate terminal (“Gas Access To Europe”), the first independent LNG import terminal in the Netherlands. Imported LNG will be unloaded, stored and regasified at the terminal before distribution through the gas transmission network for the European markets. The terminal will have an initial annual throughput capacity of 12 billion cubic meters per year (bcma) and can be increased to 16 bcma in the future.

Four European energy companies (DONG Energy from Denmark, EconGas and OMV from Austria, E.ON Ruhrgas from Germany and Essent from the Netherlands) have signed long term throughput agreements with Gate terminal. As part of the agreement these customers (or their major shareholders) each hold a 5% equity stake in Gate terminal. The remaining 80% of shares are held by Gasunie and Vopak, thereby safeguarding the independence of the terminal.

N.V. Nederlandse Gasunie (Gasunie)
Gasunie is a gas infrastructure and gas transmission company with a prominent position in Europe. The total length of its pipeline network in the Netherlands and Germany comes to more than 15,000 kilometres and, with an annual throughput of almost 125 billion m3, it ranks as one of the most extensive high pressure networks in Europe. Gasunie operates and develops the Dutch national gas transmission network and offers transmission services. Since 1 July 2008 Gasunie owns the network of the former gas transport division of BEB and EMFG in Germany, which is now functioning under the name Gasunie Deutschland. Gasunie considers the wishes of its customers, who want their gas to be transported at competitive tariffs, to be of prime importance. Gasunie also offers other services within the scope of gas infrastructure. Gasunie carries out all these activities in a safe, efficient, profitable and sustainable manner. In doing so it also serves the public interest.

Profile Royal Vopak (Vopak)
Royal Vopak (Vopak) is the world’s largest independent tank terminal operator specialising in the storage and handling of liquid and gaseous chemical and oil products. On request, Vopak can provide complementary logistic services for customers at its terminals. Vopak operates 80 terminals with a storage capacity of more than 27 million cubic meters in 32 countries. The terminals are strategically located for users and the major shipping routes. The majority of its customers are companies operating in the chemical and oil industries, for which Vopak stores a large variety of products destined for a wide range of industries.