Gate terminal will be expanded with a second truck loading station

Last week it was announced at the CWC World LNG Summit in Rome that Gate terminal (shareholders N.V. Nederlandse Gasunie and Koninklijke Vopak) will be expanded with second loading station for trucks and containers. 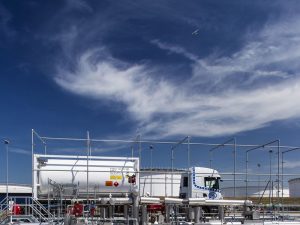 In January 2014 Gate successfully launched loading station for trucks and containers with a total capacity of 5,000 tankers per year. In the past year Gate has developed into a hub, from where LNG can be re-exported in relatively small quantities to end users to other parts of Europe. The additional truck loading facility will further support the development of the so called small-scale services within the terminal. The finalization of the construction and first loading operations are planned towards the first quarter of 2017. With the commissioning of the additional truck loading station the total capacity will increase up to 10.000 trucks a year.