Yesterday the first truck with LNG as fuel has loaded a trailer with LNG at the Gate terminal in Rotterdam. This trailer with this alternative fuel for trucks and ships is now also transported in a new way.

To make this possible different business parties put a lot of effort to adjust rules and legislation. LNG trucks are now compliant with ADR and regulation at terminals. As LNG is still a relatively new fuel it was not included in all regulation and instructions before.

The first truck is an IVECO Stralis NP400 and this truck has enough power to transport the heavy trailer for Rolande. Rolande, the transport company Chr. Vermeer Transport and Gate terminal are happy with this first loading. Till now it was practically impossible to transport LNG with an LNG fuelled truck. The three companies show that there are no restrictions anymore for ADR transport companies to make the transition to LNG trucks.

LNG (Liquefied Natural Gas) is the most eco-friendly alternative for diesel in the transportation sector and is considered to be one of the most promising alternative fuels for the transition to clean transport. LNG-driven trucks produce less noise and have lower emissions of PM, NOx and CO2. Bio-LNG is LNG that is produced from 100% waste, manure or sludge. Bio-LNG results in minimal CO2 emissions and in some cases it will be even possible to achieve a “carbon positive” result.

Gate (Gas Access To Europe) terminal is an LNG import terminal of N.V. Nederlandse Gasunie (Gasunie) and Koninklijke Vopak N.V. (Vopak). The growing demand for natural gas cannot be met without an increase in imports. Gasunie and Vopak therefore decided in 2005 to develop Gate terminal. The terminal’s functions are: receipt, a buffer between receipt and continuous supply of natural gas, regasification, supply. Imported LNG is regassified and stored under pressure at the terminal before it is supplied at a constant rate to the Dutch transmission network. There is no change in the composition of the product. The main functions of the LNG import terminal as a whole are therefore storage and handling; no waste is produced. The terminal consist of three storage tanks, two jetties and a process area where the LNG will be regassified. Each tank will have a capacity of 180,000 m3.. The terminal has start its commercial operations as of September 2011.

Rolande is European market leader on the LNG market for trucks. A market in which companies as Shell, Engie and Total are also active. Rolande owns eight LNG fuel stations in The Netherlands and has ambitious plans to expand their network in Western Europe. The mission of Rolande is to provide the cleanest, economically viable fuel to transport companies. Currently, Rolande announced that the production of Bio-LNG will be scaled up with the support of an European CEF grant. 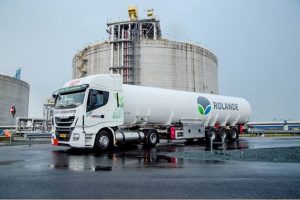 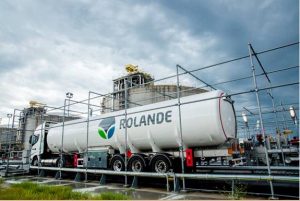