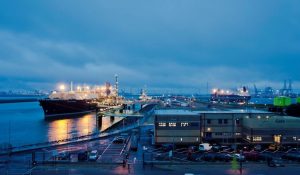 Gate terminal will start early June with the commissioning phase of its liquefied natural gas (LNG) terminal on the Rotterdam Maasvlakte. Related to this, on June 13 the first LNG-carrier will moor in the harbor of Rotterdam.

Prior to the start of commercial operations of Gate terminal in September 2011, the installations will be tested extensively for several months. In the first phase of this so called commissioning period, the tanks and pipelines are cooled down to -162 degrees Celsius. That is the temperature of the liquefied natural gas which will be supplied by LNG-carriers, stored in the three tanks at the terminal and then be supplied to the Dutch transmission network.

As not all equipment will be in use during this phase, a flare will be visible for several days as redundant gas will be burned during this period. The incineration of natural gas is safe, odorless and occurs without soot. The whole procedure has been defined in close consultation with the licenseprovider DCMR Milieudienst Rijnmond and is standard when starting up any LNG terminal.

In 2005 N.V. Nederlandse Gasunie and Royal Vopak decided to jointly develop Gate terminal (“Gas Access To Europe”), the first independent LNG import terminal in the Netherlands and are the main shareholders of Gate terminal. The imported LNG will be unloaded, stored and regasified at the terminal before distribution through the gas transmission network for the European markets.
The terminal will have an initial annual throughput capacity of 12 billion cubic meters per year (bcma) and can be increased to 16 bcma in the future.