Within two years 1,000th truck being loaded at Gate terminal

Thursday 14 January, the 1,000th truck was being loaded with liquefied natural gas (LNG) at Gate terminal, a subsidiary of Gasunie and Vopak. 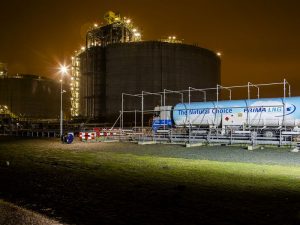 The truck was originating from Prima LNG. Within two years after the opening of the truckloading facility this major milestone has been reached. Since start-up 15 different customers have used the truck loading service. Truck loading has shown a strong increase to all market segments; off grid industrial applications, cleaner fuel for trucks, for barges and for seagoing vessels. In 2014 174 trucks and containers were being loaded, in 2015 loading amounted to 788 vehicles. A second truck loading bay is under construction. The importance of small scale LNG is increasing quickly. Other facilities for distribution of LNG are being build at Gate terminal, like a break bulk harbour basin with berthing and loading facilities.