Gasunie and Vopak to set up GATE Terminal b.v. 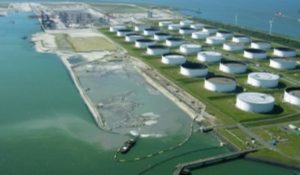 N.V. Nederlandse Gasunie (Gasunie) and Koninklijke Vopak N.V. (Vopak) have successfully completed their initial study into the feasibility of a terminal for liquid natural gas (LNG) on the Maasvlakte (the Netherlands).

Marcel Kramer, Chairman of the Executive Board of Gasunie: “The response from LNG buyers and suppliers are extremely positive. The solid reputations of the professional gas transport company and the international terminal company instil confidence. Potential partners value the independence as logistics service providers and the strategic decision to develop a terminal that will be accessible to everyone. Our involvement in the development, but especially in the operation of the facilities is highly appreciated. For this reason, Gasunie and Vopak have decided to proceed with the following stage of this project.”

John-Paul Broeders, vice-chairman of the Executive Board of Vopak: “In addition, the study conducted in the first stage identified an excellent location for the terminal. We have decided to focus on a site on the Maasvlakte at Rotterdam (The Netherlands). From that location, we have a direct connection to the gas transport network of Gasunie. On 1 November, we submitted a so called “MER start notitie” to the Provincial Council of Zuid-Holland. That is the first step towards obtaining the necessary licences.”

Gasunie and Vopak continue their collaboration in GATE Terminal b.v. (Gas Access To Europe). This terminal on the Maasvlakte is situated close to the market and will be an important LNG gateway to Europe.

The ‘open season’ phase will start on 21 November, when interested buyers and suppliers will have the chance to further express their interest in the use of the terminal.

After the successful conclusion of the feasibility study and the completion of the procedures for obtaining licences, we expect to commence the construction of the terminal in 2007. Where after the terminal can be operational in 2010.

Nederlandse Gasunie is one of the largest gas infrastructure companies in Europe. Its main tasks include operational management, maintenance and, where required expansion of the national gas transport grid. Safety and secure transport are leading principles. Gasunie actively contributes to the improvement of the functioning of the market for natural gas. In 2006 the throughput of gas was almost 100 bcm.

Profile Vopak
Royal Vopak (Vopak) is the world’s largest independent tank terminal operator specialising in the storage and handling of liquid and gaseous chemical and oil products. On request, Vopak can provide complementary logistic services for customers at its terminals. Vopak operates 75 terminals with a storage capacity of more than 21 million cbm in 30 countries. The terminals are strategically located for users and the major shipping routes. The majority of its customers are companies operating in the chemical and oil industries, for which Vopak stores a large variety of products destined for a wide range of industries.

Information on LNG:
Liquefied Natural Gas – or LNG – is a clear, colourless liquid which is the product of cooling natural gas to minus 162 Centigrade. In its liquid form, the volume of LNG is around 600 times less than that of natural gas, and therefore it can be stored and transported extremely efficiently. For transportation over long distances in particular, LNG is a good alternative for gas transport by pipeline. In the case of an LNG terminal, the LNG is delivered by sea, stored in tanks, warmed up (or regasified) and finally fed into the gas transport network. As from that point, its use is identical to that of conventional natural gas.
The global LNG industry is growing by more than 5% per annum, a strong growth compared with other fuel industries. Various LNG terminals (landing points) have been operational in Europe since the 1970s and the number of LNG receiving terminals is expected to increase in the coming decades.