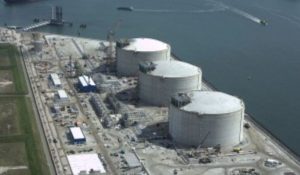 N.V. Nederlandse Gasunie (Gasunie) and Royal Vopak (Vopak), strategic partners in Gate terminal, today announce that the shareholders of Gate terminal have appointed Mr. Branko Pokorny as Managing Director of Gate terminal BV. On 1 October 2008 he will be succeeding Mr. Ulco Vermeulen who will return to Gasunie to become Director of Business Development. Mr. Pokorny will be responsible for the further construction and development of the Gate terminal, the first LNG import terminal in the Netherlands, at the Maasvlakte in Rotterdam. He has extensive experience with managing large scale projects in the energy related sector. Before joining Gate terminal he was Concession and Project Director of Elyo East London Energy, part of Suez Energy Services and General Manager of Fabricom GTI International Operations.

In 2005 N.V. Nederlandse Gasunie and Royal Vopak decided to jointly develop Gate terminal (“Gas Access To Europe”), the first independent LNG import terminal in the Netherlands. Imported LNG will be unloaded, stored and regasified at the terminal before distribution through the gas transmission network for the Northwest European markets. The terminal will have an initial annual throughput capacity of 12 billion cubic meters (bcm) and can be increased to 16 bcm per annum in the future. Four European energy companies (DONG Energy from Denmark, EconGas from Austria, E.ON Ruhrgas from Germany and Essent from the Netherlands) have signed long term throughput agreements with Gate terminal. As part of the agreement these customers (or their major shareholders) each hold a 5% equity stake in Gate terminal. The remaining 80% of shares are held by Gasunie and Vopak, thereby safeguarding the independence of the terminal.
Website: www.gateterminal.com

Profile N.V. Nederlandse Gasunie (Gasunie)
Gasunie is a gas infrastructure and gas transmission company with a prominent position in Europe. The total length of its pipeline network in the Netherlands and Germany comes to more than 15,000 kilometers and, with an annual throughput of almost 125 billion cubic meters, it ranks as one of the most extensive high pressure networks in Europe. Gasunie operates and develops the Dutch national gas transmission network and offers transmission services. Since 1 July 2008 Gasunie also owns the network of the former gas transport division of BEB and EMFG in Germany, which is now functioning under the name Gasunie Deutschland. Gasunie also offers other services within the scope of gas infrastructure. Gasunie carries out all these activities in a safe, efficient, profitable and sustainable manner. In doing so it also serves the public interest.

Profile Vopak
Royal Vopak is the world’s largest independent tank terminal operator specialising in the storage and handling of liquid and gaseous chemical and oil products. On request, Vopak can provide complementary logistics services for customers at its terminals. Vopak operates 78 terminals with a storage capacity of more than 26 million cubic meters in 31 countries. The terminals are strategically located for users and the major shipping routes. The majority of its customers are companies operating in the chemical and oil industries, for which Vopak stores a large variety of products destined for a wide range of industries.