On 1 May 2018, Gate terminal for the first time loaded 2 small LNG carriers at the same time. The Cardissa LNG bunkering vessel was at the dedicated small scale jetty while the Ice Class Coral EnergICE was loaded at Jetty 1, one of the two jetties that can handle both small and large scale LNG carriers.

Simultaneously a record daily number of 12 LNG trailers/containers were loaded. Ever sice the dedicated third small scale LNG jetty became operational in 2016 and the additional two automated LNG truckloading bays in 2017, Gate has seen a steady increase in its small scale LNG activities. Gate continues to see a growing interest in its small scale services. 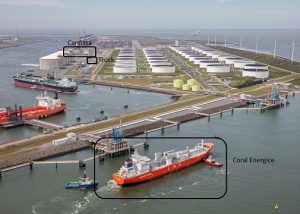