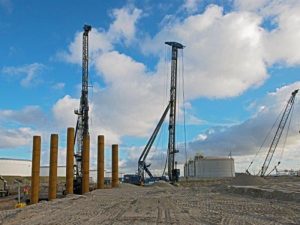 Gate terminal (main shareholders Gasunie and Royal Vopak) announces the ceremonial start of the construction activities for the new LNG break bulk infrastructure at its site at the Maasvlakte in Rotterdam. The Port of Rotterdam has begun with the excavation of a new harbour basin next to Gate terminal. The new facility is expected to boost the use of liquefied natural gas (LNG) as a cleaner and affordable transportation fuel in the Netherlands and Northwest Europe.

Break bulk (or small-scale) services aim to split up large-scale LNG shipments into smaller parcels. This enables the distribution and use of LNG as a cleaner fuel alternative for maritime vessels, ferries, trucks and industrial applications. Since 2011 Gate terminal enables overseas LNG import into Europe. Gate terminal contributes to diversifying the European gas supply by providing access to LNG from around the world. At Gate terminal, LNG is received, stored, reloaded or regasified for the Northwest European gas grid. These activities have formed the basis for the current development of small-scale services.

To mark the start of the development of LNG break bulk infrastructure and services Gate terminal has organized a ground breaking event on 31 March. Chief Executives representing players from across the complete LNG and logistics chain will be challenged to expose their visions on the future of LNG in a substantive debate. Dick Meurs, managing director Gate terminal: “Gasunie, Vopak and Gate have jointly developed an innovative LNG break bulk concept upgrading the LNG hub capabilities of Gate terminal and enabling our customers to supply LNG as cleaner fuel for transport, shipping and industrial applications.” Allard Castelein, CEO of Port of Rotterdam Authority: “We are striving to make logistics more sustainable and promote the transition from fuel oil to LNG as fuel for shipping. Furthermore, we want to strengthen our position as the most important European LNG hub.”

The new infrastructure will be located next to Gate terminal. The Port of Rotterdam Authority will build a new harbour basin and quay wall, which is planned to be delivered end of 2015. Gate will construct the LNG installations, including berthing and loading facilities dedicated to bunkerships and smaller tankers enabling LNG bunker operations in the port of Rotterdam and further distribution of LNG in Northwest Europe. The new facilities are based on a multi-user service model, open to all interested parties, and will have a maximum capacity of 280 berthing slots per year. The finalization of the construction, commissioning and first loading operations are planned towards the end of H1 2016.

LNG as fuel for the transport sector

This new facility in the port of Rotterdam will be a boost to the use of LNG as a fuel for the transport sector in the Netherlands and Northwest Europe. The use of LNG as a fuel is expected to grow substantially following the introduction of stringent new emission regulations (SECA) for the marine sector in the North Sea and in the Baltic Sea from 2015. By using LNG as a fuel, barges, coasters, ferries, as well as heavy duty trucks, can reduce their carbon dioxide (CO2) emissions by up to 20%, their nitrogen oxide (NOx) emissions by up to 85%, while reducing sulphur and particle emissions to almost zero. For these reasons, the Dutch government and the European Union encourage the development of LNG as a transportation fuel. Surveys by the Dutch ministery of Economic Affairs indicate that the introduction of LNG as a transport fuel could also bring considerable economic growth and employment.

The Port of Rotterdam Authority is involved in this project with the design and construction of a dedicated harbour basin for LNG break bulk operations and has already introduced new regulations that allow LNG bunkering for inland barges and ship-to-ship bunkering of seagoing vessels. The final result will put Rotterdam firmly in place as leading European hub for the complete LNG supply chain. The project adds an important step in achieving the goals of the ‘Green Deal Rhine and Wadden’, a partnership between the Dutch government, business and knowledge institutes aimed at promoting green growth. In 2016, a full scope of supply services for LNG will be available in the port of Rotterdam.

Shell, as launching customer, has committed to buy capacity from Gate terminal, which has enabled this investment in the terminal expansion. Shell has recently ordered a specialised LNG bunker vessel, to supply LNG-fuelled vessels in Northwest Europe. The new vessel will be based at the port of Rotterdam in the Netherlands, and will load from the new LNG break bulk infrastructure. “The new infrastructure will enable us to further improve our service to customers,” says Dick Benschop, president director of Shell Netherlands. “We expect LNG will form a bigger part of the transport fuel mix in the future.”

The project is key to facilitate LNG distribution and to secure LNG supply in Northwest European ports, such as Gothenburg. The maritime connection between Rotterdam and this area is regarded as a part of the EU ‘motorways of the sea’ concept and has therefore been selected for co-financing under the European Union’s TEN-T programme.

In this publication lies with the author’s opinion . The European Union is not liable for any use that may be made use of the information and publication.