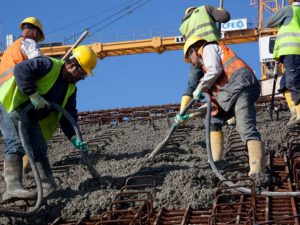 Gate terminal B.V., a joint venture between N.V. Nederlandse Gasunie and Koninklijke Vopak N.V. today announces that it has signed a EUR 745 million senior financing agreement with the European Investment Bank and a banking syndicate of 10 international relationship banks.

The financial facilities will be used to finance the Liquefied Natural Gas (LNG) import and regasification terminal on the Maasvlakte near Rotterdam, of which the construction has recently started. The terminal will play an important role in the future supply of natural gas to the WesternEuropean energy market. It will have an initial throughput capacity of 9 billion cubic meters per year and is expected to be fully operational in the second half of 2011. The project costs are approximately EUR 800 million, of which approximately 15% of the cost is funded with equity contributions by the shareholders and approximately 85% is provided in the form of financing by the involved banks.

The facilities will have a maturity of 20 years and consist of 2 arrangements. The European Investment Bank finances approximately EUR 340 million and the syndicate of 10 banks a maximum of approximately EUR 405 million excluding a guarantee facility. Both facilities are based on variable interest rates. Gate terminal has financial hedge instruments in place to substantially mitigate the potential interest exposure.

Henk Chin Sue, Board Member and CFO of Gasunie and Jack de Kreij, Board Member and CFO of Vopak jointly commented:
“We are proud that the European Investment Bank and a strong reputable international group of banks participate in this first Dutch LNG-project. Its unique open access strategy allows for multiple energy companies to benefit from this new European gas gateway. Already 3 customers have committed themselves to this project. This financial arrangement provides an excellent basis for a future expansion of the terminal”.

Customers and minority shareholders of Gate terminal
The first customers to have signed long term throughput agreements with Gate terminal are DONG Energy from Denmark, EconGas from Austria and Essent from the Netherlands. As part of the agreement DONG Energy, Essent and OMV Gas & Power (as major shareholder of EconGas) have each acquired a 5% equity stake in Gate terminal, whilst the independent character of the terminal is safeguarded.

Profile of Gate terminal B.V.
The growing demand for natural gas cannot be met without an increase in imports. N.V. Nederlandse Gasunie (Gasunie) and Koninklijke Vopak N.V. (Vopak) therefore decided in 2005 to develop Gate terminal (Gas Access To Europe), the first LNG import terminal in the Netherlands. Imported LNG will be regasified and stored under pressure at the terminal before it is supplied at a constant rate to the Dutch gas transmission network. There will be no change in the composition of the product. The main functions of the LNG import terminal as a whole will therefore be storage and handling; no waste will be produced. The terminal will consist of three storage tanks and one jetty. Each tank will have a capacity of 180,000 cubic meters. The terminal is expected to be fully operational in the second half of 2011. The LNG terminal’s annual throughput capacity can be increased to 16 billion cubic meters in the future.
More information about Gate terminal is available at the Gate terminal website: www.gateterminal.com

N.V. Nederlandse Gasunie (Gasunie)
Gasunie is a gas infrastructure and gas transmission company with a prominent position in Europe. The total length of its pipeline network in the Netherlands and Germany comes to more than 15,000 kilometres and, with an annual throughput of almost 125 billion m3, it ranks as one of the most extensive high pressure networks in Europe. Gasunie operates and develops the Dutch national gas transmission network and offers transmission services. Since 1 July 2008 Gasunie also owns the network of the former gas transport division of BEB and EMFG in Germany, which is now functioning under the name Gasunie Deutschland. Gasunie considers the wishes of its customers, who want their gas to be transported at competitive tariffs, to be of prime importance. Gasunie also offers other services within the scope of gas infrastructure. Gasunie carries out all these activities in a safe, efficient, profitable and sustainable manner. In doing so it also serves the public interest.

Royal Vopak (Vopak) is the world’s largest independent tank terminal operator specialising in the storage and handling of liquid and gaseous chemical and oil products. On request, Vopak can provide complementary logistic services for customers at its terminals. Vopak operates 76 terminals with a storage capacity of more than 26 million cubic meters in 31 countries. The terminals are strategically located for users and the major shipping routes. The majority of its customers are companies operating in the chemical and oil industries, for which Vopak stores a large variety of products destined for a wide range of industries.