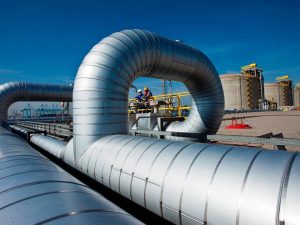 The transport company of the B.V. Nederlandse Gasunie (Gasunie) and Koninklijke Vopak N.V. (Royal Vopak) intend collaborating on the development of a receiving terminal for liquefied natural gas (LNG). The companies have signed an agreement to this effect. Still to be studied are the form such an independent receiving terminal should take, where it should be located and which parties in the market would use the terminal for supplying and/or purchasing gas.

A number of companies have recently expressed an interest in a potential pipeline landfall for liquefied natural gas in the Netherlands. A guaranteed throughput for the long term is one of the main conditions for a potential investment. Obviously, the currently valid standards for safety and the environment will be met in this matter. As to participation in the investment for such a terminal, Gasunie and Vopak have indicated that they are open to collaboration with third parties.

Carel van den Driest, CEO of Vopak, and Marcel Kramer, General Manager of Transport for Gasunie expressed their satisfaction about the collaboration between the companies. Van den Driest: “We are both working with transport, storage and energy and we complement each other well. Vopak’s expertise is mainly in the area of the development, construction and management of terminals for the storage and handling of chemical and oil products. Vopak has a presence in 29 countries with 72 terminals and has a large number of customers who are also engaged in LNG activities”.

Kramer: “Gasunie is the owner of the Dutch gas transport network and is very well acquainted with gas transport projects, gas storage and connections and with the interests of the European gas suppliers and purchasers. In terms of throughput, Gasunie is the largest transport company on the European continent and already has a small LNG installation in Rijnmond. An LNG terminal of any stature is directly relevant to the Dutch pipeline network and optimal connection to that network is important.

An LNG terminal could make an important contribution to the interests of both the producers/ suppliers of LNG and of the customers via the Dutch pipeline network. It is therefore also a logical and valuable step in the development of both companies”.

Royal Vopak is a global independent tank terminal operator specialising in the storage and handling of liquid and gaseous chemical and oil products. Upon request, Vopak can provide complementary logistics services for customers at its terminals. Vopak operates 72 terminals with a storage capacity of more than 20 million cbm in 29 countries. The terminals are strategically located for users and the major shipping routes. The majority of its customers are companies operating in the chemical and oil industries, for which Vopak stores a large variety of products destined for a wide range of industries.